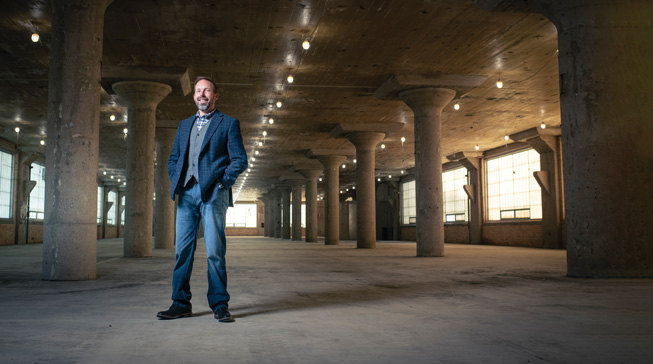 Do you have a nickname? None that I want in print.

In what city did you grow up? The metropolis of Kouts, Indiana

What book has had the greatest impact on you? When I was a kid I read a lot of Captain America comics. He was always fighting the good fight with a great variety of friends. It started my love affair with comics, art and movies. There were a lot of good lessons in those old issues.

What is the first movie you ever saw in a theater? The first one I recall is Star Wars. Our cub scout troop made crafts and sold them at a local fair to raise the money to see the film as a group.

As a child, what did you want to be when you grew up? I was in love with the idea of digging ditches as a kid. I thought it would be a great way to find dinosaurs.

What famous person would you most like to meet? Teddy Roosevelt

What is your favorite part of your job? Meeting people and solving problems. I’m not a person for quiet contemplation. I like interaction with others.

What do you actually do at your job? I get that question a lot from the people who work here! I sit down with clients who want different spaces and environments, and answer the challenges of orientation, flow, efficiency and aesthetics. Also, I golf.

What do you love most about Fort Wayne? We are Zoo people. I wonder how many times we have been. Has to be 100.

What was your first job? Pumping gas back in the full-service days. Everyone should experience the joy of customer service, particularly if there is an odor of petroleum. For a while we had the little change machines that hung on our belts. I got very good at numbers and calculating sales tax in my head.

What is your greatest accomplishment? The next one. I know that sounds corny, but I’ve been really fortunate. Our architectural projects continue to grow in size and complexity, and I am always looking for the next challenge.

What is your dream job? To play golf with clients year-round at Augusta. Is that a thing?

What is your biggest pet peeve? People who don’t care. Could be anything, their job, their neighbors, their community. Apathy drives me crazy.

Do you have a motto you live by? If so, what is it? We got this.

If Hollywood made a movie about your life, whom would you like to cast as you? Vince Vaughn

If you had a time machine, where and to what time period would you travel? Definitely the future. And the Jurassic. I can’t decide.

Who would you like to see perform in concert? Led Zeppelin

If you could travel anywhere, where would you go? We have been talking about Italy, Florence to be precise. Maybe the Amalfi Coast as well.

How often do you exercise? 3 times week. About half as often as I should.

What does your workout regimen consist of? I like the YMCA here, particularly the Jackson Lehman Y. I hit the treadmills and lift some weights. My son, Will, claims I lift fishing weights, but that’s just his way of making me feel young and vibrant.

What profession would you never try? Anything the involves heights, I can’t stand them. High crane operator, no thank you.

What is something nobody knows about you? I still collect comics. I have thousands. Don’t tell anyone.

If you could solve one major problem, what would it be? One of the greatest things a person can have is a job challenging enough so that the doing of it creates a sense of pride. I would like everyone to have that.

Where will you go on your next vacation? Banff, Canada

What’s one thing you can’t live without? Family. I get a tremendous amount of strength and support from them.

If you could give your 15 year-old self advice, what would it be? Be nicer. I was a little immature and I hurt some feelings I didn’t need to.

What’s the best piece of advice you’ve been given? Words matter, particularly the older and more established you become. Watch what you say and what it does to those around you.

What’s your biggest fear? Heights and being alone. Can’t stand the thought of either.

What is the best gift you have ever been given? I have been given some fantastic gifts. I love the ones where it’s obvious the person knows you, and completely surprises you. Laura gave me the first iPod the year it came out, I was floored.

Name one person who has inspired you in your life. I get inspiration from quite a few people here in Fort Wayne. I’m going to save them the embarrassment of listing their names, but they know who they are. It is one of the reasons that I serve on the boards that I do, to be around people at the YMCA, YWCA, Ronald McDonald House and Heartland Sings that I admire.

Do you make up jokes or steal them? My bits are all mine!

Who was your favorite teacher? Why? I had a World History professor in college who was tough. Everyone avoided his class, but I aced it. I liked the challenge of the unwinnable situation. One of my favorite aspects of Star Trek lore is Kirk outsmarting the Kobayashe Maru test.

Would you rather be invisible or read minds? Read minds. I’ve never wanted to be invisible. Where’s the fun in that?

What is one important skill you think everyone should have? Everyone should be able to deal with an irate customer. Also, being flexible and thinking on your feet are tremendous assets. I tell some people to take an improv class just to get comfortable talking and changing directions.

What skill would you like to master? I know patience is more of a virtue than a skill, but I would like to be able to have more of it from time to time.

If you could turn any activity into an Olympic sport, what would you win a medal in? The witty one-liner.

What was the last gift you gave someone? I got my daughter, Grace, tickets to see Neal deGrasse Tyson speak. She has a passion for science. It was great to be able to do that.

What was a time you failed at something? What did you learn from it? I have missed several trends and the prediction of easy to spot events. I have been trying to pull back and think more strategically.

What song best describes your work ethic? I’m Working On It by Chris Rea.

What would you do with your 15 minutes of fame? Run for president.

What is the most difficult thing you have ever experienced? We came close to losing our middle child once. I don’t know how people that have experienced that type of loss recover. My heart breaks every time I think of the folks I know that have lost children.

Do you get up when your alarm goes off or do you hit the snooze button? I’m up 10 minutes before it sounds.

How would your grade school teachers describe you? “Tom is vocal at the wrong times and doesn’t appear to have any fashion sense whatsoever.”

If you participate in a sport, do you prefer it to be an individual sport or a team sport? I like them all. I love competition. Some of the most fun I’ve had is winner 4 dollars from a buddy on the course.

What is the most productive time of day for you? Mornings, definitely.

If you could send a message to the entire world, what would you say in 30 seconds? I would like people to try to see things through others’ eyes. We all have our own perspectives but I believe there is value to understanding the thoughts of others. Especially now that there seems to be so many things trying to drive us apart.

If you received enough money to never need to work again, what would you spend your time doing? I would be doing my best Jay Leno impersonation, working on my fleet of classic cars, puttering around, having fund raisers in my garage.

When was the last time you tried something new? Well, we try every new restaurant that opens in Fort Wayne. I have tried several DIY projects at home recently, to mixed reviews, including tiling, appliance installation and painting.

If you had to teach someone one thing, what would you teach? I would love to teach a class in drawing the modern super hero.

What gets you excited and driven to achieve? It is such a thrill to be involved in the design of a new space. To meet new people and to help them realize their goals is incredible. I especially like working with groups tackle strategic planning and then relating that back to the built environment. I get up every day looking forward to these aspects of the profession.

If you could go back in time, once, and change a single thing, what would it be? I assume this means in my life and not historically. Honestly, beyond not being cruel and selfish about a million times when I was young, I wouldn’t change a thing. If it’s a historical question, definitely Lincoln’s assassination.

If you could know the answer to one of life’s mysteries, which mystery would you choose? The last thing the world needs is me knowing the answer to one of life’s great mysteries. But I will say this, it would be amazing to know how to instill a sense of wonder and inquisitiveness into all people, not just the young. Imagine a whole world of people who want to know and are willing to put the work in to figure it out. How do we create that?

What is your favorite…

Song? I’ve been on a Lou Rawls kick the last few weeks.

Drink? Angel’s Envy on a drink rock, or anything with good friends.

Pizza? All pizza, as long as we stick to the classics.

Movie? Bladerunner. The original, not that last mess.

Fort Wayne feature? I’m not sure it’s a feature, but we love the Fort 4 Fitness. It’s great to see all of the happy, hopeful people at the start and the happy, pride, tired people at the end.

Hobby? Golf, Skeet Shooting, Comics, Cars, Cigars, not necessarily in that order. My kids would say that one of my hobbies is to watch videos on my phone at full volume while they are home.

Flavor of ice cream? If I was going to get ice cream, it would be a Butter Finger Razzle from Zestos.